Tackling Sports from Every Angle: From Scrimmages to Super Bowl 50

Growing up in Colorado sports was always a big part of my life and so was the naturally beautiful and rugged landscape. In fact some of my first memories were driving with my Dad and suddenly pulling the car over to capture an amazing sunset or the wind blowing the snow off the side of a 14k foot peak, perfectly backlit. I developed an appreciation watching for the moments where beautiful light hit the mountain or the river just right.

My first frames I ever shot were where when my father handed me his Arri S film camera with a 5.9mm wide angle lens on it and told me to follow a subject on skis. This I had no problem with at all, it was not a pretty nor was it well composed and the lens was totally soaked. I had grown up on skis, racing since I was a little kid all the way through NCAA in college so the physical aspect was the easy part. At some point I decided that I wanted to make ski films, and then kayak films, always seeking adventure. After I was done ski racing I decided to travel around and become a professional kayaker competing in freestyle. I managed to take my camera everywhere and document everything I could though I was still not a very good story teller. Eventually I went to the University of Colorado Film school and got a degree in Film Production under professors like Jerry Aronson and the late Stan Brakhage.

Most of my time there I spent filming sports (although my professors didn’t like it) and making rather abstract documentaries. The really technical part of my craft I didn’t really learn until after college in the real world, surprise.

Somewhere along the way I learned to light, to properly expose the camera, and to compose a shot. I realized that I could not survive in this business without these skills so I payed careful attention to how all the other DP’s & their gaffers were doing it, borrowing every trick I could . Now I enjoy lighting a set just as much as I enjoy filming action sports, it just fuels a different side of creativity for me.

I have filmed, the X-games, auto racing, basketball, skiing snowboarding, motocross, bmx, surfing, golf, football, soccer, rock climbing, expedition races, you name it.  But understanding the flow, the little Idiosyncrasies of each sport is really key.

For example, knowing where to position yourself to get the big touchdown catch in the end-zone or where to position yourself in the half pipe while doing a tracking shot so that you don’t get hit by the snowboarder,  is pretty crucial. Anticipating the action is paramount to getting a great shot as well as for your own safety. You don’t want to be standing in the run out zone of where the athlete may crash and run right into you or on the bottom of a turn where a car can spin out and come flying at you at 100mph. These may all seem like obvious and instinctual things but I can’t tell you how many times I see guys standing in the landing zone or run out spot, not having any clue of what can really happen when things go wrong.

Filming certain live action sports you are often at the mercy of the game and you can’t control all the elements. As I said before know where you can and can’t be (as well as where you shouldn’t be) and where to be when the big moments happen.

Maybe you want to shoot a 200mm telephoto shot panning along with your subject letting all the other players or trees blur through the foreground or maybe you want to be wide on a 12mm up close letting the subject cross through the sun? These are all choices you have to make depending on what you can get away with and how creative you can get.

Filming sports commercials in many ways can be easier, hopefully you already know how the snowboarder’s tracks off the jump where they will land or in the half pipe how fast they will go and where their big hits will be. Once you understand this you will need to decide what you want to see in the background. Is there clutter, a lift tower, onlookers, etc. that you don’t want to see.

Next take a look at the sun in relation to the athlete, decide if you want to have them front lit or backlit to make the snow glisten in the sun and give them a natural rim light. There are so many factors to think about and then you have to decide how each element will come into play.

A few years ago I was asked by Nike/Jordan Brand to shoot a spot with Chris Paul on a green screen. I had to determine how the basketball player would approach the shot or dunk and how to light it best, especially for high frame rates. The luxury of filming a commercial is that you have time to rehearse and light and choreograph the athlete’s moves and the camera movement. I knew we needed plenty of light both key, backlight and on the green to evenly light it.

We were shooting with a Red at 300fps rating the camera at 800 ISO and between 45 & 90 degree shutter to reduce any motion blur. We used  5X 10k mole lights to key with and had about 16X 2k space lights to light the massive green screen. I used 4X 5k moles for a back/edge light. I had shot with CP3 several times before but I admittedly had to study up on which direction he prefers to drive and which foot he likes to jump off of. This commercial was all about the athlete and the  shoes so knew I had better get his take off foot on the lens side of the shot to best show off the logo. This determined which direction we positioned the hoop and the direction of the dolly.  It took two grips to push the dolly fast enough to keep up and two to stop us from flying off the track.

Nothing beats experience, nothing.

You can shoot with the best gear in the world at the highest frame rates with fastest lenses but if you don’t have a experience or a good feel for what is going on in front of you your shots will reflect it.  My first football game I was a little lost on positioning and how fast you have to react. The speed in which players come at you or how fast the missed ball comes zipping at your lens is really deceiving. It’s one thing to watch a game on TV where there are literally 38 cameras already set up to cover every possible angle but it’s very different to try to get the highlights all by yourself.

Years ago I asked a veteran NFL films DP some questions about the lens he was using, the film stock he was shooting etc. and then I tried to stick with him up and down the field. Without him I probably would have only gotten half the shots I did, and with much poorer shot selections. 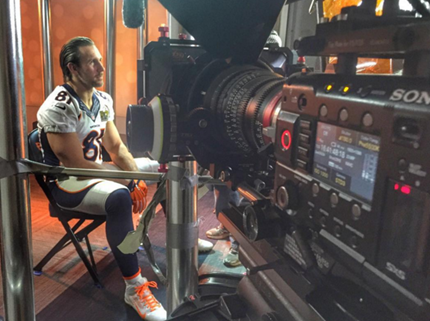 Fast forward to January of 2016, CBS asked me to shoot some of the action shots of the Broncos for the Super bowl Promotion. My task was to shoot just the quarterbacks in slow motion. I had to stay ahead of the action and get shots of both Peyton Manning and Tom Brady throwing without any other players or refs crossing between the camera and the QB’s so they could Rotoscope them out and place them on a totally different environment.

I shot using my Sony F55 in 4K Slog3 Cine EI rating the camera at 800 ISO. I used the Canon Cinema 30-105 lens with a Preston Microforce zoom control. As many of you probably know shooting live sports (or often a sports commercial) using a zoom lens is a great tool especially with no time to change lenses and moving the camera on the fly to get the right frame size. I didn’t need nor would I want to shoot at f1.3 with a prime lens. I needed more depth of field with all the quarterbacks movement that I didn’t want them running in and out of focus more I could handle pulling on my own. I had more than enough light at f2.8-4 to give me between 3-5  feet of near and far focus. I worked the west side of the stadium for a while, then as the sun sank lower in the sky I switched sides to give the QB’s a stronger backlight from the sun which I knew would also help out the guys in post to create better separation. 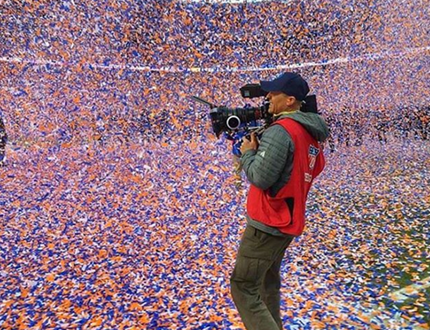 Somehow it all worked out, a little luck a little positioning and a little bit of experience helped to get the shot. 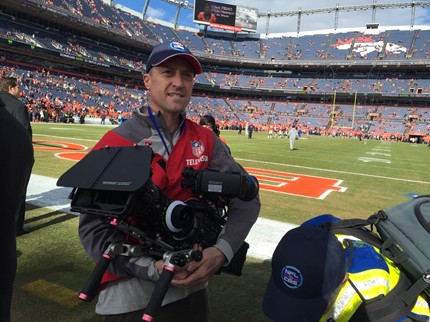 Brook Aitken is a Cinematographer shooting, commercials, tv shows, documentaries, music videos and high end corporate work. He is also a drone operator with extensive experience.  He has been filming all over the world for the last 17 years and has won a handful of awards including the Academy Award for the film “The Cove” in 2010 about the dolphin slaughter in Japan.
Some of his regular clients include the NFL,  NBC Sports, CBS Sports, Scotts Miracle Gro, The PBR, WD-40, AEP Power Company, Nike/Jordan Brand, & National Geographic.

Visit his site at http://www.brookaitken.com.

“Dominate Another Day” Nike/Jordan Brand from Brook Aitken on Vimeo.